The season kickoff for the Texas XC Mountain Bike State Championship Series was this past weekend at Rockyhill Ranch in Smithville, TX. What it really felt like was Exctruciation Exam Part II! The forecast was promising rain, and rain it did…the morning of the race! Sitting in our hotel room staring out the window we contemplated not racing at all. It was still early, around 7am and Carlos’ race didn’t start till 10. We decided to at least be optimistic that it wouldn’t keep pouring down so we switched out our racing wheels that had Specialized Renegades on them to our training wheels that had Specialized Fast Traks. Still not a mud tire, but better than the slick Renegade.

We headed to the ranch at around 8:45 to check out how all the Cat 3 racers looked coming out  of the trail. As they rode in their bikes and jerseys were covered in mud. The start of the race was rerouted to bypass some of the red clay areas that get real bad. Carlos’s loop was going to be one long 18 mile loop so it was commit or quit for him. There was no turning back once he got out there. He suited up and started warming up. The only way to get better at riding in mud is…to ride in mud! We were hoping with the reroutes there wouldn’t be anything bad enough to damage our bikes.

He lined up at the starting area and they were off! As his large group raced up the long jeep road start he was splashed in the face like crazy from the puddles of mud. The first and last quarter of the race were the sloppiest. The back half is generally pretty sandy so it wasn’t too bad after the rain. It was in the back half that he was in a pace line on a jeep road and fixated on the wheel in front of him. He lost concentration for one second and hit a side wall of the trail. It all happened so fast that Carlos went flying and landed on his back. A few guys passed him at that point as he got up and pressed on. In the slippery last few miles of the trail some muddied up roots claimed him. His front tire pulled to one side and he hit the ground. It was a rough race.

While Carlos was out on his adventure race, I was back at the car getting myself ready. My start was scheduled for noon, but the rain delays from earlier had carried over to our start time and it was now changed to 12:20. I rode around and tried to get a warm up in near the finish area so I could see Carlos come through. He rolled in and it was about five after twelve. I got in a few more quick sprints and lined up.

I saw several new faces, which is really exciting to see the sport growing in the women’s field. Our course was originally supposed to be around 3.8-4 miles and we were racing four laps. Like the other Categories, our start was also rerouted up the jeep road along with a few other sections through the trail. When the whistle blew we quickly formed a line going up the road and I was in third behind Christina and Jessica. When I looked back at the top of the climb we had a pretty good gap from the rest of the group.

The trail wasn’t too slick for the first few miles, but the mud on a few climbs felt like it grabbed ahold of your tires and didn’t want to let go. My bike felt so heavy! I had lost sight of Christina and Jessica midway through the first lap and I rode solo the rest of the race. The last few miles of the loop I was starting to regret not taking up cyclocross this winter! I was sliding around like crazy on two sections called “The Grind” which is a big dip, and “The Wall” which is a REALLY BIG DIP! When I saw the tire of the guy in front of me going side to side at the bottom of The Grind I knew I needed to be extra careful. The whole area was really tricky with some off camber turns and wet red clay. 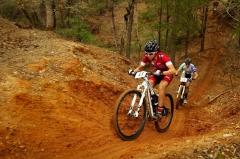 Each lap I could see the leaders on the other side of the trail, each of us hammering in opposite directions on the jeep road, I was heading toward the start/finish and they were going out on their next lap. On my final lap as I was passing a lapped rider I caught a glimpse of an Austin Flyer’s Kit through the trees. I didn’t have any room to let up! Not ever looking back I kept pressed the pace and crossed the finish line seven seconds before Kate Sherwin (Austin Flyer’s.) It was an awesome race with some great competitors!

I am really excited to see such growth in the amount of women that are coming out! There is so much talent here in Texas and I know had there not been any rain that morning even more girls would have been racing.  I’m pretty happy with the results of this race, especially with the conditions, and my training is right on track!  I’m excited to continue to get stronger and to see how the year unfolds.  2013 is going to be full of BIG goals and BIG races!

Help Us Get To Our Destination