So many of you guys have made sure to let me know that I’ve been quiet on here lately. Thankfully it’s because I’ve been super busy racing my bikes, training, and working very hard at growing our Dallas/Fort Worth Women’s Mountain Biking Community with our Dirt Side Sisters weekly group ride. I’ll definitely be blogging about that very soon, but for now, here it is back by popular demand…my BT Epic race report!

A few weekends ago we ventured out to Steelville, Missouri for the Berryman Trail Epic. It’s a 52 mile mountain bike race that starts at the Bass River Resort and makes its way through gorgeous forest with super flowy singletrack and long sustained climbs. Last year Carlos had heard about this race on Facebook, so at the spare of the moment we signed up with absolutely no intention of being competitive. We went out to ride, enjoy the new scenery, and take a break from racing. Despite our plan not to ride hard, the racer in me took over at the end, I pushed it hard to the finish and placed second last year. I was happy with that, but I knew I could do much better with a go from the gun mentality.

This year our focus was clear and the goal was to try our best for me to move up to that top step of the podium. We started our days worth of a drive up to Missouri on the Thursday of the race. We arrived at the resort just in time to setup our A Liner and head out for a short spin. There was rain in the forecast and we completely lucked out! It drizzled over night and through the next morning, which was just enough to make the trails perfect! Although it was sprinkling and raining on and off throughout the morning, I grabbed my phone and rode around the campgrounds taking in the beautiful fall foliage that surrounded us. Carlos always knows when I sneak off like that, I’m out somewhere taking pictures in the woods…it’s just something I love to do! But this time I was so camera happy and caught in the moment that he got worried because I was gone so long and we had zero cell phone service, so there was no way to reach me either.. Oops! 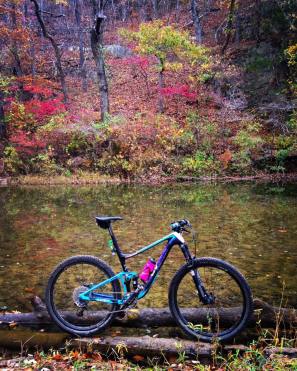 When the weather cleared up we headed out for a partial pre ride of the course. We had an idea of which sections of the trail we wanted to get to and had a blast. He helped me work on a few steep switchbacks that were pretty tricky and tight.

That particular section of single-track was densely covered in leaves which made it really hard to see where the trail was going, and you had no idea where the underlying rocks and roots were. When we finished up our ride and of course took more pictures, Carlos mentioned that he couldn’t see very well out of his right eye and it was hurting pretty bad. All he could see was a grey, blurry fog. As soon as we got back to our camper he took off his contacts and I bought him some eye drops in the little store at the resort. The drops burned his eye like crazy and didn’t help at all. He began to get a headache and said it was getting worse. I don’t know very much about contacts and eye problems so of course I searched Dr Google. You better believe that every single condition I read with his symptoms instructed to go to your eye doctor right away because of the risk of losing your vision. I kept constantly asking him if he was okay, if it was getting better, and he would just say, “I don’t understand how an eye can hurt so bad!” I started to get scared and we decided to drive into town. We stopped at the pharmacy to ask where the nearest eye doctor was located and they said, eight miles away in the town of Cuba. When we got to Cuba the sign outside of the doctors office read that he closed at 3:00 pm….it was 3:30. Crap! But Carlos pulled on the door and it was open! The receptionist was very nice and listened to us explain our situation. I’m sure she could also see that we were a little bit distressed. They were very understanding and thankfully they took him in for an exam. The doctor said there were several scratches on his retina but no sign of infection. He put an antibiotic ointment in his eye and prescribed him more so that he could apply it again at bedtime. All we could do at that point was wait to see if he would be able to put his contacts on in the morning. Here is an interesting fact that we learned…your eye is the fastest healing part of your body.

In the evening we prepped our bottles and nutrition for the next day. We like to have everything ready to go the night before for early morning races. Carlos said, “If my eye isn’t better in the morning and I can’t race, I’m going to line up, turn myself inside out on the first four mile climb up the jeep road, so that you can draft me and win Queen of the Mountain.” I don’t think there’s any better way to say “I love you” in cycling words than that! So the next morning came the moment of truth, whether or not he would be able to wear his contacts. He carefully put them on and there was only slight discomfort, which meant he was racing!!! Yeah!

We finished getting ready and Carlos rolled out of the camper pretty early to warm up a bit. I wanted to get a quick spin to loosen up my legs so I headed over to the starting area. It was twenty five minutes till the gun went off, and my goodness, there were already two rows of racers lined up! It was a pretty unintelligent decision on my part to warm up so close in time to the race, which made for a quick change of plans…no warm up for me. Instead I tried to get as close as possible to the front and the only way to do that was to stand on the edge of the third row. Carlos rolled up next to me and when the race started, we were split up right away. I had to squeeze around a few of the guys with hard accelerations to catch Carlos’ wheel. Once I was there I shouted to let him know, and we were off. This is when we entered the pain cave and stayed there for about twenty minutes. Those first four miles are hard, painful, and it literally feels like your legs are going to explode from all the lactic acid you’re producing. I was really kicking myself in the butt for not warming up. 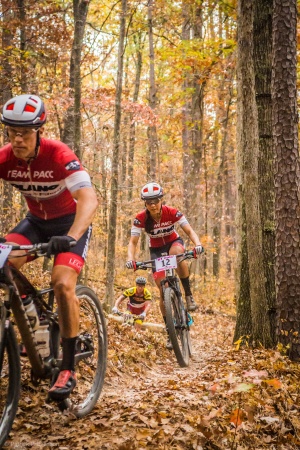 So far, as we entered single track, our plan was working perfectly. I was the first female to get to the top and I won $100 for the Queen of the Mountain! At that point, Carlos signaled me to get ahead of him so he could recover for a second. It wasn’t long until he was riding past  me on one of the first technical climbs which was covered in leaves and loose rocks hidden underneath. The guys directly in front of me dismounted and so I joined them on foot running up the steep terrain. Up until the first main feed zone at the Berryman Campground where our drop bags were, Carlos guided me through the trail which made for a smooth ride.

Our drop bags were in order numerically according to your race number. One of the volunteers grabbed by bag quicker than I could find it, switched out my bottles, and in no time I was ready to go. Carlos was still trying to find his bag when I yelled out, “Baby I love you!” I had an internal battle riding off without him because we had such a great rhythm going on together, but that was the agreement we had before the race started. We were there to race and usually splitting up is just the way it goes. Marathons are so important to know and listen to your body since you’re on the bike for four or five hours.

I got into a good groove riding by myself. I glanced back through the woods and saw a choo choo train of riders coming at me. When they got closer I asked them if they wanted to pass but they were happy with the pace I was holding. One of my PACC teammates, Randy Gibson was in that train. Randy’s a fast Cat 1 50+ racer and not to mention a pretty funny guy! I had a feeling that Carlos had no idea Randy was now in front of him since Randy didn’t stop at the feed zone. Our team has this healthy competition and we all like to push each other, but I knew if Carlos didn’t bridge up to us it was going to throw him for a loop when he finds out. I rode with Randy up until the last few miles of the race where I broke off on my own. I felt really good the entire time and it was fun to ride with someone I knew who I could play and joke around with. Shortly after we were done, Carlos came across the finish line and his smile instantly faded when he saw Randy standing there. “What are you doing here?!?” Carlos asked. “What are YOU doing here???” Randy asked back. HAHAHA! Randy thought Carlos was in front of us the whole time and that kept him pushing, where Carlos obviously thought Randy was behind him so he backed off thinking, “I got this!” Well boy were they both wrong and that just goes to show the power of the mind.

I was so happy that the lead I had gained with Carlos’ help on the first half of the race, stuck until the end. I looked back a few times through the fifty two miles and I never saw another woman, finishing almost eight minutes ahead of second place, and I improved my time from last year by over twelve minutes! It was a good day in the saddle.

The awards ceremony, ginormous swag raffle, delicious food, endless amounts of beer, and awesome bonfire is really what makes this race unique. They raffled off thirty beach cruisers and the whole night is one big party! Not to mention Bass River Resort has THE BEST PIZZA!!!! And they deliver to your campsite, how cool is that?!? I’m sure the secret is out by now that I can EAT, and eat, I did!!

So there it is, another adventure of Carlos and Lisa! Next we’ve got some cyclocross and one more marathon at one of our favorite places, Palo Duro Canyon!

Help Us Get To Our Destination